In the movie THE WAY, Martin Sheen plays Tom, an irascible American doctor who comes to France to deal with the tragic loss of his son (played by Emilio Estevez). Rather than return home, Tom decides to embark on the historical pilgrimage “The Way of St. James” to honor his son’s desire to finish the journey. What Tom doesn’t plan on is the profound impact this trip will have on him. Today 100,000 pilgrims a year still follow “The Way of St. James” from France into Spain and one of the highlights of their pilgrimage is to visit the magnificent cathedral in Santiago de Compostela, about 1.5 hours from the port of Vigo, Spain. 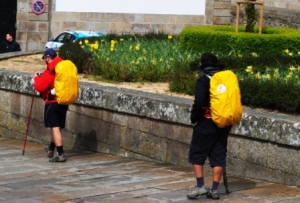 In the middle ages anywhere from 500,000 to 2,000,000 visitors a year poured into northwestern Spain. Many who came were guided en route by what is considered to be the world’s first travel guidebook written in 1130 by a French monk. Not everyone could make the almost impossible pilgrimage to the Holy Land so for many Europeans the trip to Santiago was a possible alternative. The distinctive pilgrim garb was a simple hat and a shell. Visit Santiago de Compostela today and you will see, in addition to the tourists, pilgrims by the scores with their hiking shoes and backpacks who are walking “The Way of St James”. 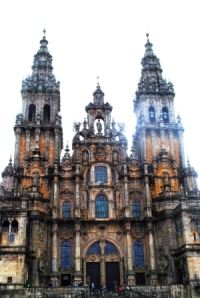 So, what’s the fuss? According to tradition (that marvelous word that covers a multitude of religious tourism sites around the world, and perhaps a multitude of related sins as well) Apostle James brought Christianity to the Iberian Peninsula then was beheaded in Jerusalem in 44 AD. Here’s where the legend gets interesting, and perhaps a bit dubious. The legend that the remains of the Apostle James were brought to Galicia for burial in an anonymous field. In 813, guided by a bright star no less, a shepherd found the burial of St. James at Santiago de Compestela The shepherd took the story and the bones to the Bishop, who recognized opportunity when it came knocking. The declared the bones to be the remains of the Apostle James and built a church. Reportedly miraculous events started occurred as a result of people praying to the bones of St. James. 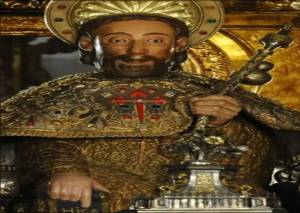 Pilgrims, religious tourists with money, started flocking to Santiago de Compestela and as many as 2 MILLION people a year hiked across Europe (without benefit of tour buses) to make a pilgrimage to the town. The present church constructed 1075-1128. The mystical attraction is to climb up above the high altar where there is a quirky-looking silver statue of St. James, place your hands on his shoulders, and make a prayer or a wish. I made mine, but if it happens it will be God above, not St. James or a silly-looking statue that gets the credit. (I go direct!) But anyhow the church is still a big tourist attraction for everyone from pilgrims to popes. 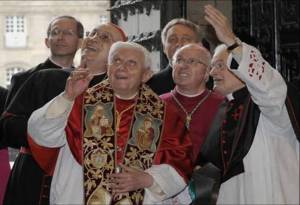 The inside of the church is impressive without a doubt! And I got to attend a service – standing room only by the way – with the music of the giant organ thundering and rolling through the stone arches. So how does any church, even a church with the relics of St. James, get a standing room only crowd of tourists and locals? Well, as the early churchmen discovered (and fellows like Robert Schuller tried to copy in more recent years) you’ve got to add some zing. Some flash! Some pizzazz! And they found it in Santiago de Compestela in the form of a giant incense burner which at the end of each service, “representing the prayers of Santiago de Compestela”, is filled with incense, set afire, hosted and then swung from the top of the cathedral back and forth soaring of the heads of the awe-struck congregation! It is impressive and quite a show!