I’ve done pretty well on ships, never really getting seasick.  But there have been some close calls, like when I was working on a private yacht, a big ship by yacht terms, but small by cruise ship terms.  We were trying to beat a hurricane which was hot on our tail sailing around the Western end of Cuba for Havana.  A few times, on the Atlantic and heading around Cape Horn it was rough, but I managed without getting sick.  If you are out at sea and caught by a storm you don’t really have much choice but to ride it out.

Which is what the world has to do, right now, with the coronavirus pandemic.  So, we are riding out the storm at our home outside of Boquete, Panama.  Honestly, this isn’t a bad place to ride out any storm.  But Panama, just like the rest of the world, is facing challenging times.  There are about 250 some cases of Coronavirus and as of this morning I think there have been 5 deaths.  Being a small country, roughly 4 million people, Panama from the start has taken the threat seriously.  We are pretty much on lockdown, not necessarily a total quarantine but headed in that direction.

You are expected by law to self-isolate, remaining at home except to leave for specific reasons like trips to the store, pharmacy, etc.  All but essential businesses are closed.  There is no traffic in or out of the country and traffic within the country is severely curtailed.  Copa, Panama’s major airline, has shut down completely except for special flights arranged through Panama’s state department to repatriate foreigners stuck in Panama.  The is an absolute curfew which has now been extended from 5 pm to 5 am.

Cancelling public events, closing beaches, bars, and clubs, forbidding public gatherings or even small, local family/friends get togethers, and getting everyone to “maintain social distance” is tough in Panama because it goes against the entire Panamanian culture of social congeniality and appreciation of and enjoyment of life.  When closings and restrictions were first announced everyone did the most Panamanian thing they could think of … they went to the beach!  They treated it almost like an extension of Carnival.  So the screws have been tightened and I think I read, not that I read Spanish, that almost 2,000 people were arrested and cited for breaking the curfew yesterday.  Now most of that is in Panama City, but the government is making clear that they mean business and that the quickest way to return to normalcy is to cooperate and stay safe.

Fortunately the Canal is still open for business and making money.  I think two Canal employees out of around 10,000 have been diagnosed with the virus and about 140 are quaranteened.

Yes, I know that some people think that you can get by in Panama without speaking Spanish.  To a certain extent that may be true but let me give you three major reasons WHY YOU NEED TO KNOW SPANISH if you want to live happily in Panama.  #1 – All of the rules and restrictions coming down are all in Spanish.  Good luck as a gringo (defined here as an extranjero who does not speak Spanish) figuring out what’s going on and what the rules are.  NEWSROOM PANAMA is helpful as are Google computer translations from TELEMETRO REPORTS are helpful but only to an extent.  You end up relying on what your workers hear on the radio or what gets passed along word-of-mouth by the “Gringo Coconut Telegraph.” Everyone in Panama does NOT speak English regardless of what you may read online.  It is a Spanish speaking country and you are expected to speak Spanish.  There is no “Press 2 for English” when you try to do business.  #2 – If you can’t read business/legal Spanish you will get screwed.  This is the country that brought you the “Panama Papers.”  Life most Latin American countries corruption and payoffs are a way of life from the top down.  The “due diligence” in financial affairs by your “agents,” regardless of what is said, has no relationship to what that means in the States.  Your “agent” will consider their own interest to be primary and yours to be secondary.  And, if you’ve heard, it’s difficult to sue in Panama, should you want to sue a corrupt agent or lawyer, you will not live long enough for the case to go to court.  And when, and if, it does go to court, Panama’s system of law is totally different from, for example, US law.  US law is based on English common law and precedent.  Not so in Panama.  The decision is totally up to the judge: forget precedent . . . and in a country with a tradition of lack of transparency and corruption . . . well, good luck,  #3 – If you have Panamanian friends and you want to talk about all the important stuff friends talk about and share, you need to speak the native language understanding the nuances of meaning.

So, back to riding out the pandemic, it’s tough as a resident foreigner to figure out exactly what the new rules are, and, as everywhere in the world these policies are emerging, being constantly refined and adapted to a rapidly changing situation.  So, we are doing the best we can under the circustances given our linguistic limitations.

One of the good things about all this is that you know that almost everyone is at home around the world, more or less bored, so it’s a great time to take advantage of Skype or Whatsap and reach out to friends.  I called a long-time, really great friend of mine back in California.  You have to know a little of the background of our relationship.  I met him back when he was about 12 and his older brother was helping me renovate our house in Ventura.

Both kids came from what might diplomatically be called a rather fucked-up family life.  When they were 13 & 15 both ran away, lived on the street for a while, and eventually we took them under our wing.  Interesting times!  They supported themselves by selling “herb” and at one time the younger kid, I think he was 16 by then, was running a string of half a dozen twenty-something “runner boys” selling “herb.”  The kid had a real head for business long before selling pot was respectable.  At one point my wife worked very hard, pulling all the strings she had access to, in order to get him back into school.  You can imagine my wife’s chagrin and anger when, failing one subject he needed to pass to stay in school, he had a conference with the teacher, pulled out a wad of cash, laid it on her desk and asked, “What does it take to get a good grade?”  And the teacher took the cash and gave him the grade!

Both these guys ended up being good men and great fathers.  The older one was a long distance truck driver who tragically died in a fiery accident.  The younger one, now a mature 30-something dad and businessman, has a medical marijuana distribution service.  We were chatting on the phone and I was lamenting the fact that my source of “Vitamin R” had been eliminated due to the coronavirus decree making Chiriqui a “dry” state with no 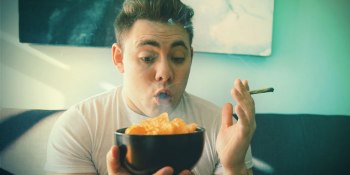 alcohol sales allowed.  He laughed, assuring me that his business was booming.  Not only that, he noted that LA County had officially declared marijuana delivery businesses to be essential operations just like pharmacies, grocery stores and the like.  His solution to keeping people at home, not on the street, was for Trump to declare a “Marijuana for all” policy since then, people would be happy to sit at home on the couch zoning out munching Doritos, or in Trump’s case cheeseburgers.  Of course then Doritos might become harder to come by than toilet paper and there would be a run on McDonald’s which unfortunately are closed.

So, if running out of rum is my greatest challenge of sheltering in place, I guess I can survive … as long as the store doesn’t run out of Macademia Nut Brittle Haagen Dazs ice cream, my only other vice.

So … most of us, but unfortunately not all of us, will get through this IF we work together, follow the rules, maintain our social distances and wash, wash, wash our hands.

Trevor Noah and the Daily Show have been a great help to me in getting through the past couple years … well, since the last election actually.  I like his brand of comedy and more importantly his educated, well read, thought-out world view.  He pulls no punches, throws in enough street talk to make me feel at home.  I like his “between the scenes” chat the the audience and his current shot-from-home “Socially Distancing Daily Show” is

actually, I think, better than the more professional, in-studio Daily Show.  Trevor keeps me laughing, even now.  But there is just one problem.

The unwashed, real Trevor Noah without makeup and studio lighting, an elderly Millennial still struggling to grow respectable facial hair, unfortunately has an uncanny resemblance to Robin, my favorite bar tender in Boquete at Butcher Restaurant, which, like all the restaurants is closed.  Robin makes up amazing drinks . . . now only a distant memory.  Damn.