“What’s with the same red shit in all your Canal pics? Don’t you own another shirt?”

Yes, I own other shirts, but this is my special “Canal Day” shirt.

Living in Panama we are at the end of the line. After clothing has gone to T J Maxx and the other stores-of-last-resort in the United States, it is bundled up and shipped by the container to Panama where it is sold cheap in “Ropa Americana” stores. I happen to like bright, colorful Hawaiian shirts and since wearing a flowered shirt does something to the macho self-image of Panamanian men, the Hawaiian shirts don’t fly off the racks to locals.

This particular shirt I thought was the loudest shirt I’d ever seen, but I thought it might be fun to wear for on deck tropical parties on the cruise ships. Because it is so happy, and bright, I thought I’d start wearing it on Canal Days. When I wasn’t on the bridge giving commentary and out and about on deck, the shirt would make it easy for guests to find me. So it became my signature Canal Day shirt.

The shirt is Nautica. When I bought it in the Ropa Americana store in Panama it still had the Nordstrom price tag of $47. I paid $1.50. Correct! $1.50 for a brand new, Nautica shirt! On one of the cruises the art auctioneer tried to get me to let him auction the shirt off for charity. The only problem is that now, after all the Canal Days and being washed by the ship’s laundry “the” shirt is getting a bit threadbare. 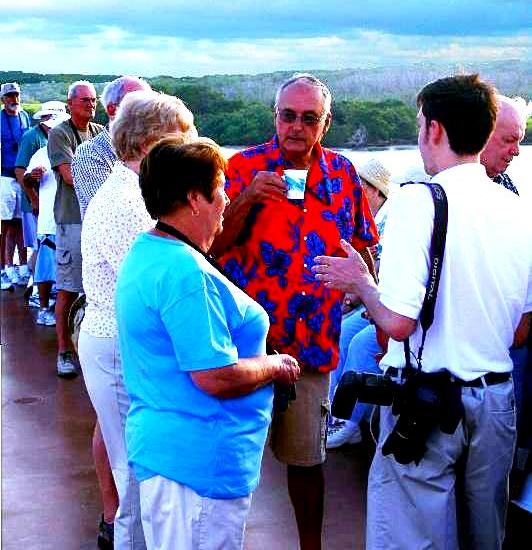