Craig & Jeannie joined us on Princess. Craig and I have been friends since 9th grade. Maybe now we’ll get them to Panama!

PANAMA’S reputation as the hub of the America’s for airline passengers got another boost on Wednesday May 7 with the United Airlines announcement of direct nonstop flights between Denver and Panama City.

The new service to be introduced December 3 (subject to US government approval) will operate daily November through August and five times weekly in September and October, offering Denver-area travelers direct access to the Panamanian capital and connections to several additional cities in Central and South America through United’s strategic partnership with Copa Airlines.

United will operate the service with Boeing 737-700 aircraft with 118 seats – 12 in United First and 106 in United Economy, including 40 Economy Plus extra-legroom seats.

Preliminary estimates show that the Denver-Panama City service will generate between $35 million and $40 million in annual economic impact to the State of Colorado and will create more than 400 new jobs.<“>“Just as Tokyo opened a gateway to Asia, Panama City will open the Rocky Mountain West to all of South America,” said Denver Mayor Michael B. Hancock.“Following the success of our Denver-Tokyo flight, our new service to Panama City will link our Denver business and leisure travelers to the business and finance capital of Central America and open the door to other new, international destinations through our partner airlines,” said Steve Jaquith, United’s managing director of the Denver hub.The addition of the Denver-Panama City flight comes as international passenger traffic has reached historic levels at DIA over the past year. March 2014 was the all-time busiest month for international passenger traffic in Denver. United’s service to Panama City will provide a convenient connection for travelers to top destinations in South America, including: Brazil, Peru, Colombia and Argentina.

“Panama City ranks as one of Denver’s largest unserved markets in the Central/South America region,” said Kim Day, Denver’s Manager of Aviation. “Our air service development strategy carefully targets destinations which we believe offer the most potential for long-term success, and we have long focused on Panama City for service. Similar to our efforts to secure service to Tokyo’s Narita International Airport, we focus on hub-to-hub connections that will best serve the size of our growing international market. United’s flight will connect to their Star Alliance partner,Copa Airlines, which has a well-developed hub in Panama City connecting to nearly 40 cities in the region.”

“In addition to providing nonstop service to 30 destinations in 11 countries across South America,Copa’shub in Panama City also provides access to destinations across Central America and the Caribbean. Denver will serve as a convenient connecting hub for passengers across the north- and Midwest, as well as Canada, who want quick access to Panama and South America. [NEWSROOM PANAMA]

The complex on the left is the new addition to Tocumen already under construction.

This isn’t the USofA and Panamanian Presidents although not the “leaders of the free world” have what one Panamanian, whose Martinelli party lost, says are “almost omnipotent powers” to spend and make policy and laws apart from the National Assembly.  Current President Ricardo Martinelli is said now to have set a record for … “discretionary spending.” Previous Presidents made an average of $25 million “disappear” … no receipts required … and Martinelli is said to be setting a record of discretionary spending to the tune of $55 to 60 million!

Not Here, You Don’t

Although same-sex sexual activity between consenting adults [age of consent is 18] has been legal in Panama since 2008, there is no recognition of same-sex couples. Pressured by the Roman Catholic Church, now probably scratching their collective heads at Pope Francis’ dogma “Who am I to judge?”, a proposal that provided for same-sex civil unions was defeated in 2004.

Visiting gay couples who have been officially and legally married in any of  20 countries will not have their union recognized in Panama.

Panama’s Official Gazette posting of Act 7 of 8 May 2014, – the Code of Private International Law of the Republic of Panama, specifies that national authorities do not recognize formal same-sex unions.

“Marriage between individuals of the same-sex is prohibited,” says Article 40 of the regulations. Later, the text adds, “foreign law shall not apply if it is contrary to the Panamanian public order.” The consequence is that same-sex married couples in 20 countries that currently allow gay marriage, do not have conjugal rights in the country, said gay rights activist Ricardo Beteta. [PANAMA NEWSROOM]

Expat gay couples seeking ways to protect their shared property and focus on other LGBT issues have begun meeting quietly in Boquete. Most of us who live in Boquete know gay couples. They love it here and fit nicely into the fabric of our community. Don’t look for a Gay PRIDE parade in Boquete … but, for those of you who have homophobic tendencies, just know that an influx of gays is good for property values … and good friends!

Having spent much of my life in cold climates, such a waste shoveling snow when I could have been snorkeling, I understand winter driving which means driving in snowy and icy conditions.  One of the great fears of driving in winter in cold climates is hitting a patch of black ice.  The road may appear to be clear, but you can hit a spot covered in ice, concealed by the black pavement and just like that you are skidding across the road.  So, if you drive in cold climates you learn about black ice, about skids, and how to get out of skids. But I never was prepared for “brown ice” in Panama.  When I take what used to be a shortcut between Boquete and Boca Chica … it’s no longer shorter or faster, but hands down it is a more enjoyable ride than going through David … I’m very careful to watch out for stray cattle and horses walking down the middle of the road.  And I’m fairly used to the one traffic jam I sometimes get into … a farmer moving a herd of cattle down the road from one pasture to another. 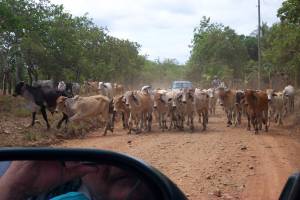 Early one morning as the sun was coming up over the mountains I was driving down to Boca Chica and encountered a whole herd of cows all over the road.  Not just one or two, but he entire herd had broken through a fence and was having a party on the highway. Who knows?  Maybe they were drinking, doing drugs, excited, or just having a shit festival, but there were cow cakes all over the highway.  Runny, soft, squishy cow cakes.  And driving on them was just like driving on black ice!  I started going into a shitty skid across the road.  Fortunately winter driving skills, like riding on a bike, are something you don’t forget and I was able to stay on the shitty (literally) road and wiggle my way along without mishap. Moral: you never know what to expect in Panama!