Last Sunday was Mother’s Day in Panama, officially celebrated last Monday.  Mother’s Day is probably the biggest and most important  holiday in Panama.  Traditions vary.  In many small towns the men of the town will get together in the evening to have a drink and then spend much of the night going from house to house serenading the mothers, sometimes with guitars and other instruments, and, for the more well-to-do accompanied by strolling musicians.

Our “capitan” or manager, all-purpose farm worker is named Sabino.  I first met him when he was working as a helper on the construction of our house in Palmira.  When I ended up firing the contractor (that’s a story that’s in my book!) and needing to finish the project in 2 months before leaving on a five-month cruise contract, I hired Sabino as one of my workers.  When our first farm worker left, I went out and found Sabino.  He’s honest, dependable, a good worker, and he doesn’t drink.  He lives at the entrance to our finca in a truck body that we converted into housing with his lady, her children, and their baby daughter.  He’s very active in the local church which is a charismatic, Pentecostal group of mostly Ngäbe-Buglé, Indigenous neighbors who work on the coffee farms.  Sabino is what I would call an Elder and has groups of local Ngabe Christians gathering on the porch of his home for prayer meetings and Bible study.

For Mother’s Day they planned a special program to honor the mothers and women.  This is significant because for a lot of Ngabe women in the past were treated more as chattel than as persons.  Although many Ngabe men spoke both their native language and Spanish they didn’t allow their women to speak Spanish.  The men could take multiple wives, often including girls who had just reached puberty (against Panamanian law where the age of consent is 18 but the law is different on the independent Comarca territory), and the winner of drunken barroom fights on Saturday nights, often with machetes, could simply take the loser’s woman by the hair and take her home.  Fortunately things are changing and Ngabe women are more and more taking their rights.  So an evening honoring women and mothers, planned by the men, with the food having been prepared for the women by the men, is special.

Sabino had asked me to stop by and take some pictures.  Not wanting to be overly intrusive I tried with available light, my camera obviously confused by bare hanging light bulbs, so some of these are a bit blurry, but you can get the idea.  These are the kind of serendipitous moments that make living in Panama special! 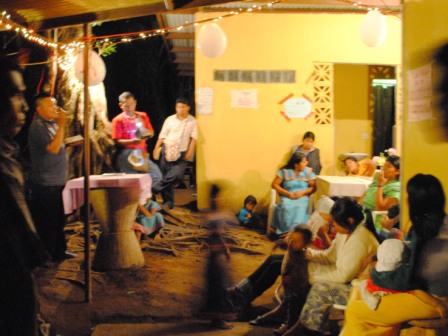 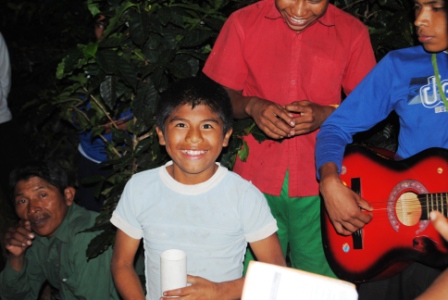 Sabino in white shirt and tie! 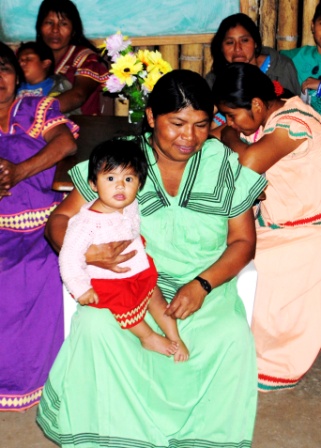 Sabino’s partner Cirila and their daughter Emily. Emily is wearing the knit pink sweater that my oldest daughter wore as a baby!