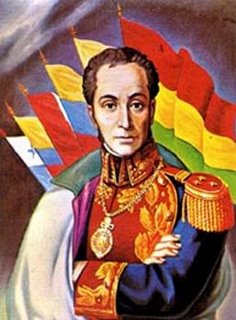 There probably wouldn’t be a Panama, or most other Latin American countries, if it hadn’t been for the Great Liberator, Simon Bolivar. This weekend’s holidays in Panama surround the celebration of Panama’s separation from Colombia in 1904, with the encouragement and support of the US.  The reason why Panama united with Colombia in the first place was Simon Bolivar’s grand vision of what he called Gran Colombia, a kind of European Union of the Latin American countries, most of which were freed from Spain by Bolivar’s battles.

Bolivar was a rich kid with a great “trust fund” and an unlikely leader to encourage Spanish colonies in the New World to throw off the oppression of the Spanish Crown. As a young man he had a private tutor with some revolutionary ideas of freedom and equality who deeply impressed a young Bolivar and headed him down the path of liberation.  If you’ve never read the story of Bolivar’s life, I’d encourage you to do so.  Amazing man with an amazing story.  BOLIVAR: LIBERATOR OF A CONTINENT by W.Y. Boyd is an enjoyable read.

Gran Colombia lasted 1819 to 1830 but eventually was undone by squabbles between member countries and power grabbers.  Panama admired Bolivar and voluntarily joined Gran Colombia.  It was in Panama City where Bolivar called the Conference of Latin American Presidents and you can visit the actual tiny cottage where the Conference was held in Casco Viejo, today located within the Ministry of Foreign Affairs building.  Bolivar famously said that if the world ever had a capital it would be Panama.  After the dissolution of Gran Colombia Panama found itself part of Colombia with little in common and egged on by the US, who wanted to pick  up the French concession to build a canal but were stymied by Bogota, Panama dissolved its union with Colombia.  In return for a canal concession the US kept Colombia from “retaking” Panama.  Colombia never recognized Panama until 1921 after the United States paid Colombia US$10 million, plus $250,000 per year for several years.

Family at the Ministry of Foreign Relations, House of Simon Bolivar, Panama City, where the Conference of Latin American Presidents was held

Today Panama shares its Eastern border with Colombia with the Darien jungle serving as separation.  The US has helped Panama beef up border police, who look more like a crack military unit than cops, to protect the border from clandestine Colombian drug labs and FARC rebel encampments, all just across the border in Panama.  Today there are tens of thousands of Colombians in Panama and major Colombian investment.  HSBC Panama was recently sold to Banco Colombia.  Much of the coffee production area around Boquete is being snapped up by Colombian coffee companies who can’t get enough of the stuff Juan Valdez would rather drink!  Together with Colombia, Panama struggles with the US demand for illegal drugs due to the totally failed US “War on Drugs”.