This blog started out about India . . . but as you can see it has been delayed by several days, not because India is different, but because Internet on board ship is different!  The Internet and its power and necessity in life is something that we take forgranted just like toilets and running water.  The Internet is something the cruise lines can’t get right.  People may want to “Escape completely!” as Princess advertises, but that doesn’t mean they want to be out of touch with TV news, the Internet and Skype!  The cruise lines like to blame it on the satellite connection, but as someone who worked for MTN, the Internet service most cruise lines use, buying Internet service on board ship is just like buying Internet at home: you pay for the size of the pipeline!  Cruise lines just don’t want to invest the money in the equipment or the size of pipe required to meet their customers expectations.  Getting this published has now taken me five separate attempts, over 22 minutes, and without even getting connected, yet being charged for 22 minutes. But I’m a stubborn m’f’er But pleeeese, don’t get me started or no cruise line will ever let me back on board!

One of the things that never ceased to amaze me is what seems to impress, or depress, North Americans and Europeans the most as we make our way around the world.

You can see the Taj Mahal . . . and what is it that people talk about when they get back to the ship? The same thing they always talk about: the trash! 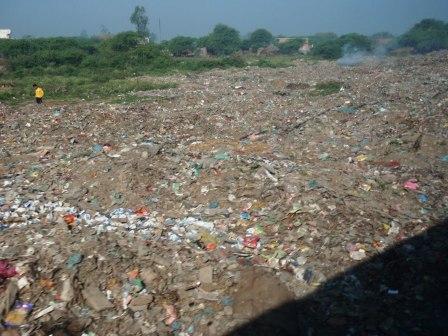 I did the two-night overnight trip in India, and before we even got to India I did a talk called “Magical India.” And India IS magical! But to see the magic, you have to look beyond the mass of humanity, beyond the mass confusion, beyond what at some times is in fact poverty, and beyond the trash . . . and there is trash, lots of it . . . and SEE the magic! What some folks fail to realize is that the reason why you book a world cruise is that you want to see how other people live and you want to experience what is different. All of the world is not like the US, Canada or Europe. It IS different, and that’s the point! Our ideas of cleanliness and picking up trash are our attitudes and our culture. In many parts of the world people are more concerned about what they are going to eat and how they are going to eat and don’t have the luxury of worrying about picking up the trash. Not everyone has the organized trash collection which we seem to prize in the Western world.

The people who do well on world cruises, and in places like India and Africa are people who are “travelers” and not just “tourists.”

To do the two night Taj trip involved a complex itinerary that involved long bus rides through tiny, dusty towns, sometimes on dirt roads, airplane rides [And, quite frankly, I can’t think of a US airport that comes near to Delhi in terms of size, efficiency, beauty and cleanliness!], and a 3 hour train trip on the Indian railway. 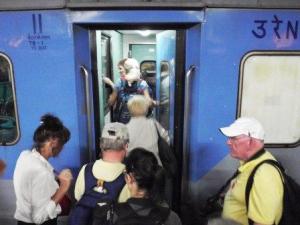 India is famous for its railway system. First introduced in 1853, the Indian railroad system is one of the largest and busiest rail networks in the world carrying 8 million passengers every day. There are almost 7,000 stations and the railroad is the world’s largest commercial or utility employer with over 1.4 million employees. But getting on and off a train in India is something that just has to be experienced to be believed. Getting on wasn’t that bad . . . it was 6:15 am. But getting over 100 gray-haired Princess world cruise guests, some of whom have canes, walking and weight problems, and all of whom have a Western sense of politeness . . . was unbelievable. I had to turn into a football blocker . . . literally . . . pushing and shoving Indian women way from the train steps so my folks could 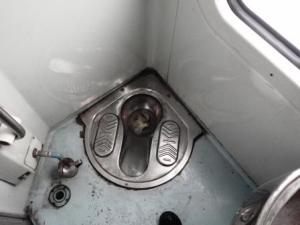 get off and wouldn’t end up just getting pushed back into the car and riding off screaming and crying to God knows where in India! All comes with being the ship’s escort! But we got everyone off and managed to herd a wide-mouthed crew of folks through a vast train station where people were sleeping on the floor. But I had troopers . . . who even managed to handle the rest rooms on the train! So, behind the scenes . . . India!

In the country Indian women gather up the cow dung, pat it by hand into nice pie-shaped cakes, dry it in the sun and store it up to use as cooking fuel. Yes, they have propane, but the “flavor” is better when the food is cooked over cow dung. 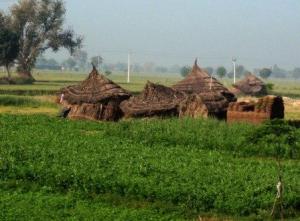 Cows are of course sacred in the Indian Hindu culture, but, as our guide explained, “In India we have three pets: horses, dogs, and cows.” So the cows are like town pets, who wander through traffic, rummage in garbage piles, and deficate on sidewalks.

I had more to share . . . but . . . Usually after I’ve written a blog, edited and reduced the pictures, it takes 10 to 15 minutes to publish.  This has already taken over an hour!  Un f’ing believable!  So sometime in the future, if the gods of shipboard Internet get happy, I’ll try again . . .  after a few drinks since it just took yet another attempt!!